To cap off the 700km mini Tour de France, and Road to Menton, the group of riders, minus Pat, raced up la Madone, with Pat and Laetitia following in the support vehicle.

For some reason the boys couldn’t understand why Pat would rather spend the day with a beautiful French girl, Laetitia Bèle, having lunch under umbrella’s on the Mediterranean beachfront, rather than race up an unrelenting gut busting hill *sigh.

Later that afternoon, Thursday 26th , the cyclists and Laetitia met Jean Baptiste Martini, Chairman of the Webb Ellis Rugby Club. He led them up the 400 steps, which wind and climb though ancient buildings and alleyways of the old city of Menton. A climb steeper than the Co d’Izoard –  stopping at the William Webb Ellis Statue located at the Martini Gate, entrance to the ancient cemetery of Menton; where ancestors of Martini have been buried for 500 years. 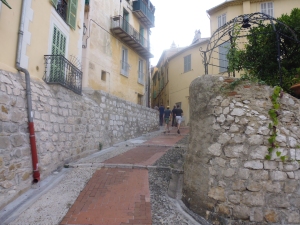 It was here after two weeks of plane flights, hotels, cycle rides and adventure, that Pat returned the sign.   Rue Webb Ellis was handled for the last time, passed to the Deputy Mayor of Menton and Jean Baptiste Martini.  They shook hands, exchanged pleasantries, and parted ways with an invitation to one-day return to Menton.

As the Deputy Mayor walked to her car, she had a bemused smile on her face as if to ponder – what do I do with this sign now?

Laetitia Bèle, Jean Baptiste Martini, Pat and a few others then walked to the grave of William Webb Ellis, 150 m beyond the Martini Gate – a well-kept and prominent grave – where Nigel, the Scotsman, took photographs to record the occasion.

The Scotsman, Nigel Taylor’s,  parting comment was: This is a pilgrimage, there is no other way of looking at it.

What started and finished as fun trip filled with humour, also became a moving event for everyone involved – a story that has become an artefact in its own right.

The NZRM: Rue Webb Ellis – Return of the sign is not over! We have stories and photos of Pat, Garry and the signs journey to share over the following days; the people they met, the places they went and the connections they made.